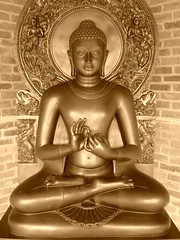 It is weird that I am both at a high and low point in regards to my relationship to Buddhism right now.

This last weekend was very good in the sense of feeling like I have a handle on aspects of my practice, at least as far as meditation goes, and reinforcing my desire to practice. At the same time, stuff that I am not willing to get into in public has come to somewhat of a head in terms of Buddhist politics. For once, it isn’t because of anything in particular to do with me but more to do with the way Buddhism propagates in the West, the politics between groups, and how teaching and training for groups is handled.

Energetically, I feel myself both renewed in a commitment to practice but also very very tired of the layers of BS that I and other people who simply want to be properly trained and practice seem to run into. Some would say that this is karmic but it is beyond any individual as well. It just becomes tiresome. When I think of the amount of things that I have had to wade through over the years or others have, I am troubled for the future, both my own and that of other would-be practitioners. If people knew the full scope of difficulties that their commitment to Buddhism might involve (and I’m not speaking of the Bodhisattva Vow here), they would be very discouraged at times.

I’m also still sick, which no doubt colors my mood, but I am feeling pretty discouraged. This is no a criticism of any teacher that I’ve had. I have nothing but respect and warm feelings in regard to anyone that I’ve actually worked with in the past five years. I never expected to run into as many barriers as I have though.

Something for me to sit with, it would seem. At the end of the day, the world is unlikely to change because of my wishes. I can only choose how I wish to deal with things.