There is still a lot of pagan in me, as I’ve said before. It is still my basic cultural paradigm for interacting with the world with whatever Buddhist sensibilities I’ve developed on top of it.

I’ve always appreciated, if not always dramatically celebrated, the wheel of the year as a sensible series of holidays (or “holy days”) during the year. Of these, I’ve always appreciated the solstices the most. They are the points of the greatest light and darkness in our daily experience of the world. Today, the Summer solstice occurred at 4:38 AM today in my local time (and I think that I was even awake for it!). Today we enter Summer. The days will continue to get hotter, especially here in California, but they will begin to shorten again.

Since I’m not involved with any of the pagan groups in California, having pretty much switched entirely to focusing on Buddhist practice in the year before I moved down here, I’m not celebrating today’s solstice with anyone. I’ll engage in my normal meditative practices today.

Instead, this weekend, I will be visiting family and friends in Seattle with my wife. While there, we’re going to go to the Tsubaki Grand Shrine of America, the only North American Shinto shrine. This will be to attend Nagoshi-no-Oharahi Taisai (夏越の祓), the great midyear purification. (Shinto is rather big on purification…) It isn’t quite a solar celebration as much as a midyear one since it is performed on the last day of the sixth month of the lunar calendar, being one of the two great purifications done a year (the other being at the end of the twelfth lunar month). This rite is a form of purification involving walking through a circle of rope. A large sacred ring called a chi-no-wa, made of loosely twisted miscanthus reeds, is set up and after oharahi people walk through it. It was originally intended for the purification of agricultural workers, to ward off mishap.

The shrine describes the event with the following:

This is one of the most enjoyable and interesting ceremonies and important days of Great Purification during the yearly cycle...during this ceremony the Oharahi-no-Kotoba (the most important words of Shinto) is read facing the sanpaisa instead of Shinzen and participants receive the Kirinusa Oharae (Oharahi Shinji)....this Taisai employs the sacred instruments of Katashiro (paper effigy/hitogata) and Chi-no-Wa (reed hoop) to purify any unfortunate Ki from first hald of the year and then to receive fresh Ki/ power of Nature to successfully pass through the second hald of the year...after the Chi-no-Wa Shinji participants can see the purified Katashiro go into the Mountain River (Katashiro Shinji).

We joined the shrine a bit over a year ago when visiting Seattle but this will be the first event that we’ve attended since that time. I’m very much looking forward to it.

The seeming oddness of a (nominally Korean) Zen priest who grew up Roman Catholic and was a Neopagan participating in Shinto purification rituals is not entirely lost on me but, as a friend of mine once said to sum up certain aspects of the global world we find ourselves within, “Aloha, Amigo!” 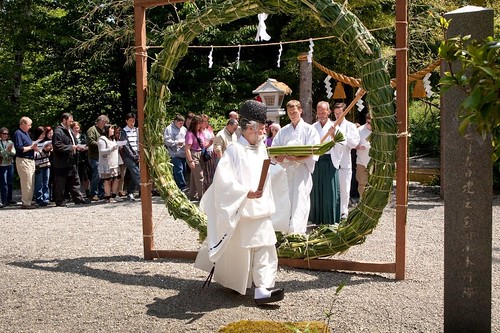