Eido Shimano Steps Down as Abbot of the Zen Studies Society 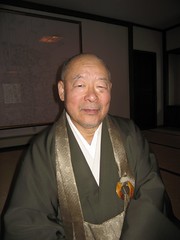 I blogged back on August 22 about the rekindled controvery with Eido Shimano, the longtime abbot of the Zen Studies Society in New York, concerning his alleged history of improper sexual relationships with students. The New York Times had a piece on it and there has been other documentation available for some time now.

The Zen Studies Society organization and its board has been trying to deal with this issue and what to do with their abbot. The Tricycle blog has just broken the news that Eido Shimano is stepping down as abbot and sent them a letter yesterday concerning this action. I include the letter below:

September 7, 2010 Dear Friends, I would like to acknowledge the pain and unnecessary suffering you went through in your hearts due to my faults. I have a profound feeling of remorse for my actions. This August marked my 50th anniversary in the United States. During this half-century I have received so much from people the world over. Over time, I took your kindness for granted and arrogance grew in my heart. As a result, my sensitivity to feel the pain of others decreased. Now, as I reflect on the past, I realize how many people’s feelings and trust in me were hurt by my words and deeds. Please accept my heartfelt apology. My mother was the person who encouraged me the most to follow Buddha’s path. Tomorrow is her memorial day, as she passed away on September 8, 1986. Hearing her voice, I have decided to observe my 50th anniversary in the United States by stepping down from my position as abbot of the Zen Studies Society on the last day of Rohatsu sesshin in 2010. Even though I carry sadness in my heart, as a Buddhist monk, my vow to practice will not end. In order to preserve the Dharma legacy, ensure the training of future teachers, and to purify my own karma, I must march on. Gassho, Eido Shimano

This is quite big news, especially within the Zen world where Eido Shimano has done a lot of harm, both to the women he allegedly had improper sexual relationships with as a teacher (NEVER, ever do that if you’re a teacher!) and for all of the men and women who looked up to him as a representative of the Dharma, an example to all. The fact is that there are a number of wonderful teachers out there who have Shimano as their teacher and preceptor, which leaves them in a very difficult position and, often it seems, at a loss as to how to properly react.

I’m glad to see that he’s stepped down. I find his apology to be somewhat half-hearted and a bit overly indirect in acknowledging responsibility but at least it is done and he’s resigned. I hope for the easing of his suffering as much as all others.