A Buddhist and artist that I know from twitter, the Kamikazen, designed a new logo for my blog today. You can see his post on it (as “Steampunk Dharma”). He’s also making t-shirts of it available as well.

The full version can be seen below. It is a steampunk Manjushri, which fits very well with the byline of the blog of “Open Source Buddhism, Technology, and Geekery.” 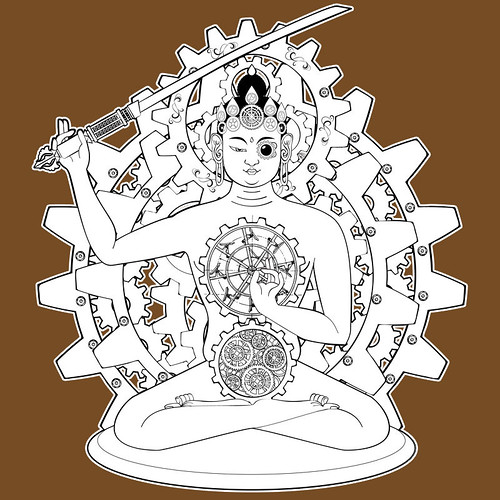 For those unfamiliar with Manjushri, I recommend the wikipedia article on him. He is often considered the embodiment of prajñā, which is the wisdom of the prajñāparamita texts, foundational to Mahayana Buddhism.

You can read about steampunk as well but it is, essentially, a literary, fashion, artistic, and gaming movement that re-imagines the pre-World War I industrial age as it should have been or in a fantastical way reflecting our current values and viewpoint from a post-Industrial age. (It has also been called, “What happens when goths discover brown.”) There is a lot of fiction being written that is steampunk and a lot of makers (like the people at my hackerspace) make steampunkesque gadgets with brass, gearing, and lots of welding. My monthly gaming group is playing a 19th century steampunk game as well as the crew of an airship.

So, all in all, I think it is a pretty appropriate logo to have on my blog. I’m really thankful for the Kamikazen for having done it for me. It is a great piece of artwork.