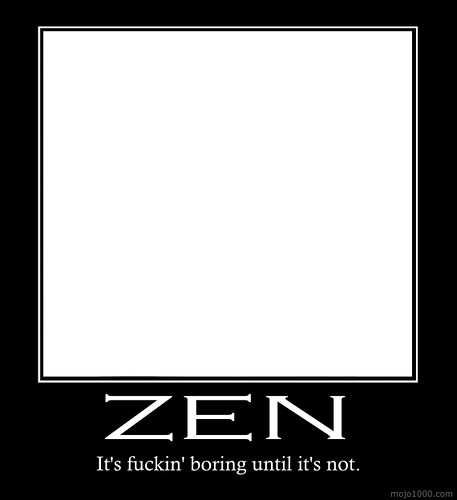 I came across part of the following quote today in comments on Jack Daw’s blog post, The Enlightenment of Ghouls. Jack posted about his disillusionment with many Buddhists and their materialism and attachment.

The quote is from the great Indian Vajrayana teacher, Tilopa, in his “Ganges Mahamudra,” as translated by Ken McLeod:

"Those who follow tantra and the vehicle of the paramitas, the Vinaya, the Sutras, and the various teachings of the Buddha with an attachment for their individual textual traditions and their individual philosophy will not come to see luminous Mahamudra, because the seeing of that luminosity or clear light is obscured by their intention and attitude. The conceptualized maintenance of vows actually causes you to impair the meaning of samaya. Without mental directedness or mental activity, be free of all intentionality. Thoughts are self-arisen and self-pacified like designs on the surface of water. If you do not pass beyond the meaning which is not abiding and not conceptualizing or focusing, then through not passing beyond that, you do not pass beyond or transgress samaya. This is the torch which dispels all obscurity or darkness."

Without getting in Vajrayana language, one of the themes above, which I have seen from other great teachers, is not to get attached to form and views, even those forms or views that we label as “Buddhist.” Within my own Korean Zen tradition, we talk about not “making things.” We live in worlds of our own creation, rather than the world as it is. We don’t see, hear, taste, touch, smell, or otherwise experience the world as it is but, instead, the world of objects and labels that we have reified from the actual experience of things just as they are. When we become Buddhists, perhaps because we see the cracks in this created facade or sense the incompleteness or barrenness of it because it isn’t reality as it is, we often replace these mental labels or objects with “Buddhist” ones. We congratulate ourselves on how evolved we are or how refined our views and practices are but we’ve just replaced one bucket of shit with another. Either way, it is still shit and you aren’t going to go through the motions or intellectual arguments of Buddhism and realize your awakened nature but dressing the world up in a different set of clothes.

A friend of mine, named “Robert,” used to own an esoteric bookstore in Seattle. Much of his stock and customers were Buddhists, as opposed to the pagans that I normally ran with. It was one of the places where I began to encounter Buddhist books and ideas though. Robert used to mention that one of the problems with Buddhists, in his experience, was “ABP,” or “Artificial Buddhist Personality.” This is the persona that so many Buddhists seem to assume where they take up the trappings, the mental ones as much as any physical ones like statues or beads, of what they think a Buddhist should be and they wear them like a new skin. They aren’t necessarily compassionate, for example, but they know they should be so they go through the motions. The problem here is, of course, that realization is not a persona. It is not something that we take on or assume as mask or role. It is a waking up from masks and roles. The compassion and other attributes of awakening are the natural result, as expressed in the world, of this awakening. Sure, we can go through the motions of breaking negative habits and fostering positive ones, being more compassionate, but that is simply training for later, when we can truly see things as they are, including other beings. Many of us are bad at this (probably Jack Daw is at times, I know that I am) because we know that we haven’t realized this directly for ourselves and we know that everyone is just as full of shit as we are.

I suppose the truth I’m trying to convey here is don’t “do” Buddhism. Study the Dharma, especially the words of great teachers. Practice it with whole heartedly but don’t make it into some kind of game or another social scene in which to insinuate yourself. In fact, if you can, avoid Buddhism or set it aside if it gets in the way of actual awakening. Don’t be attached to it and, at the end of the day, remind yourself not to make anything. Pay attention and see things as they are, both looking inward as well as outward. Wake up!