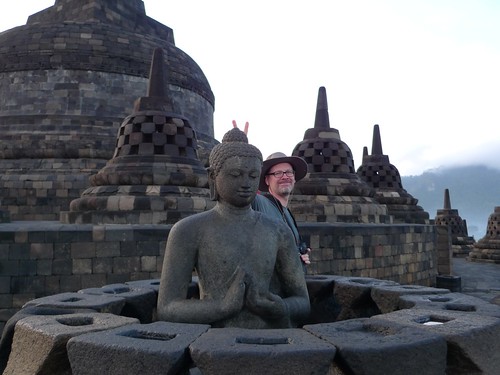 Me at Borobudur on Java paying homage to the Buddha

I realized that I have only indirectly spoken about myself in this blog for quite a while. I figure that most of my readers know who I am, what I am about, etc. or they just don’t care that much about the details. Since I do randomly pick up quite a bit of traffic, it is probably relevant to go over some personal things here, as well as updating existing friends or fans on my life a bit.

My name is Al Jigen Billings, as it says in a few places. The middle name of “Jigen” is assumed/gifted and not a legal name. California has a few legal alias recognitions such as “Professionally Known As” or something similar. Jigen is my ordination name within the Five Mountain Order (FMO) and sangha, the Zen organization(s) of which I am a priest. I was ordained almost two years ago as a novice priest after completing some of the seminary work in the Five Mountain Seminary and having already worked with my primary teacher for a few years before that. I’ll be taking more vows as a Bodhisattva Priest (or senior priest) at the end of this month in retreat. FMO is a Korean Zen (or Son or Seon) organization ultimately derived from the famous master, Seung Sahn, and his Kwan Um School of Zen. (In Monty Python parlance, we’re “splitters,” having organizationally gone our own way quite some time ago.) My work in Zen is focused on participation (including teaching) within the Five Mountain Seminary and my own practice. We have no sitting groups running in my local area so I sit with other groups or, mostly, at home. I work with my teacher via skype, usually spending about two hours a week doing video chat with him, working on koans and seminary issues, as well as discussing practice.

I co-founded Ace Monster Toys, a nonprofit (incorporated) hackerspace in the Bay Area in 2010. We rent a 1,600 sq ft space in north Oakland, have regular meetings, and generally work on building stuff. I serve on the board and am currently the president but all of these could easily change. I’m a big believer in the culture of making things with our own hands and tools, rather than simply being a consumer culture.

I also work at Mozilla on the Firefox web browser as a QA Engineer (aka a software tester). I’m the leader for QA on our sustainability releases and I also run QMO, our QA Community site, and do work on its development and enhancement. I may or may not stay at Mozilla forever but it has been a nice contrast to the nine years that I spent as a software tester (and, briefly, project manager) at Microsoft for Internet Explorer. I like open environments.

The moniker of this web site is “Open Source Buddhism, Technology, and Geekery.” I believe that Buddhism is in an era, with all of the traditions (including some dead ones) available to so many people that we should be embracing their commonalities and borrowing or sharing what works from any tradition of Buddhism in order to have something that provides the best possible support for our goal of simply waking up, which is what enlightenment really is. Sectarianism and bureaucratic BS should play no role. As I’ve said before, if I wanted the politics and domineering dogma, I would have stayed a Roman Catholic. I’ll happily borrow Theravadan jhana techniques if they work, just as I’ll borrow Tibetan mahamudra techniques. I’m less concerned with permission and doctrine than I am with utility. That said, I am of the camp that Buddhists (or people that call themselves such) need to have a basis of understanding in the doctrine and philosophies of Buddhism. I question the ability (and eventual success) of Zen organizations that, for example, never have anyone read a sutra or actually discuss or think about what the Buddha or famous teachers said. It isn’t enough to simply stare at a wall and have no basis of understanding in what you’re doing.

If it isn’t clear yet, I don’t consider myself an especially holy person or somehow any sort of guru. Buddhist teachers are, in reality, just like anyone else. They can be confused at times, even full of shit. They have foibles, make mistakes, or otherwise act, well, human. One hopes that with some measure of experience, especially with meditative practice, koan work, and the like, that they develop some insight into themselves (or their lack of self) and the human condition, which they can then share. Any Buddhist teacher you meet that exudes an explicit (as opposed to incidental) aura of holiness or perfection should set off a warning light. Like doctors or psychiatrists, many people cultivate an aura or persona of being a certain kind of person but it is just a mask assumed. All teachers or dedicated Buddhist practitioners are just themselves, maybe more aware of certain things, but still just folks. I try to cultivate an up front presentation of my approach to Buddhism and life but to recognize, as well, that I can be as completely full of crap as anyone else. Beware the holy men for they have something to sell you.

In my day to day life, I’ve been struggling with aspects of my health for a few years. In late 2008, I went to Egypt for a vacation (with a stop in London) and came back with an undiagnosed virus. (It is undiagnosed because when they rule everything else out and have no clue what is making you sick, they say it is a virus but there are millions of those.) I was sick for three months, lost 35 lbs in weight, had my heart rate go to about 100 beats a minute, my blood pressure reach near stroke levels, and had a revolving fever. Eventually, I “recovered” from this, though it took six months for much of it to resolve. The illness brought out a latent sleep disorder, related to sleep apnea (or a form of it, depending on who you ask) so I generally sleep with a CPAP machine and wake up five or six times a night now. Needless to say, this has played holy hell with my life ever since and probably precipitated some problems that I have fought since then.

I have a Master’s degree from California State University, Dominguez Hills in Interdisciplinary Humanities with a concentration in Philosophy. I did my thesis on particular religious beliefs of the Hermetic Order of the Golden Dawn. After this, I did some graduate level work in the Institute of Buddhist Studies in Berkeley and even joined the doctoral program at the Graduate Theological Union for Buddhist Studies. Unfortunately, I was also still quite messed up from my viral illness and ongoing sleep problems. I was also still working 60% time at my Mozilla job and, effectively, couldn’t deal with all of the demands, my fatigue, and the overall stress. I quit my program during the first semester and went back to working full-time. I still have an interest in doing doctoral work in Buddhism but it seems unlikely to happen at this point.

For most of the last year, partially in response to the health scare two years ago, I’ve been re-focusing on fitness. I’ve been working with a trainer two days a week for over six months. I’ve lost 25 lbs (and could lose another 25 probably) and gotten to the point where I work out about six days a week. I swing a lot of kettlebells, do cardio training on my bike, and have developed into a weight lifting crazy. I have an olympic barbell, dumbbells, and plates in my garage and have been learning how to properly lift weights. I never thought I’d enjoy the physicality of these things, having been a computer geek since I was a teenager, but it has been really life changing for me to do this.

I have a set of goals for this coming year that I will mention, at least briefly. In regards to Buddhism, during the next year, I plan to:

I think that this post has rambled enough for now so I’ll stop here.