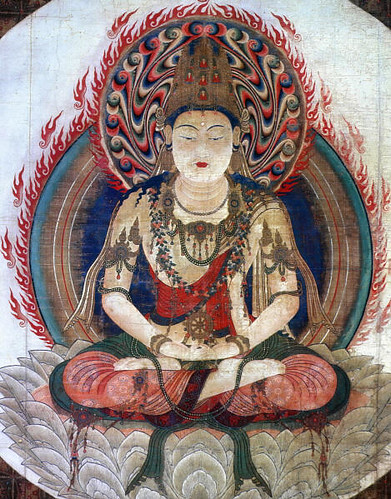 I am taking Hokai Sobol’s online course, The Three Pathways of Awakening, which is offered through Buddhist Geeks. This is a six-part course that is offered every Sunday morning at 9:00 AM my time for the next six weeks.

The course is offered as an audio gathering where you dial into a local number, either on your phone or skype, and listen to the teacher speak. Later, he is able to unmute various participants and they can ask questions or make comments.

According to his bio page, Hokai is a Shingon teacher and a follower of Acharya, Rev. Jomyo Tanaka. I’ve encountered him online on and off for a few years through his blog and the Buddhist Geeks podcast and associated community.

Since I have some (possibly irregular) connection to Tendai in my past, which is the sister school to Shingon that also practices the Japanese form of tantric Buddhism, and I am also interested in the development of new Buddhist practices in the West, the class appeared to be of potential interest. I figured I’ve got nothing else going on at 9:00 AM on a Sunday morning and it could be quite useful.

Below are my notes from the first class, taken as the class progressed during the 1 1/2 hour session. This class was the introduction for the course as a whole.

This is a six part course.

Class 5 will be looking at developing a personal practice based on the previous components, irrespective of specific methods or styles. Class 6 will focus on integrating formal practice and every day life.

The readings given before class provide some basis for perspective for the class (see here and here).

We are looking at the post-traditional approach to Buddhadharma.

At the beginning of this class, we will recite a short refuge first (for those that have taken refuge before).

The Buddhadharma arose with the prince of the clan of the Shakya over 2,500 years ago. He felt a severe crisis engulfing his life sometime in his 20s. After trying to do away with his feelings of unfulfilment and frustration, he decided to leave home, and his wife and child, to master the spiritual disciplines available at that place and time. After doing that for several years and mastering various techniques and their experiences, he found those approaches to be insufficient. He awoke to the idea that there is a deep conditioning around our experience that acts as a veil. This veil acts as something that reduces lucidity or wakefulness. Things appear to exist separately, or independently, including a sense of self. The relationship between self and all things or experiences remains hidden from our awareness. This prompted him to renounce his reliance on these veils. The practices he had done before had not made these veils clear. These were mainly concentration practices that produced trance-like states where the mind appears infinite, endless, or the mind seems to seize and experience a reality that is nothing at all. However, when returning from these experiences, the Buddha found that he was not changed. This is not to say that he was not changed by these experiences but he returned from the experiences of these practices.

Later on, these veils are described as affective or cognitive veils within Buddhist tradition. The Buddha did not systematize them this way at the time. After he penetrated his condition, the Buddha had a series of remembrances of various types of existence. Subsequently, he had a third experience where he achieved knowledge or supreme clarity as to the nature of both relative reality (or experiential realm) and ultimate reality (or the fundamental nature of everything). This third event is most appropriately known as the Buddha’s awakening though traditionally all three are stages or steps in his awakening.

This basic event of his awakening is what gave rise to Buddhist tradition, basically.

The first form of his teaching is the 45 years of teaching of the Buddha to his disciples, his collected sayings, practices, etc. The Buddha taught all sorts of people, lay people of all sorts (merchants, courtesans, philosophers, kings) who were householders as well as people who became monastics.

This first form is fundamental to all schools of Buddhism. This was focused on the central idea of renunciation, meaning a conversion or spiritual turnabout from a life that is limited and trying to find fulfillment in the evershifting objects of experiences to a life that is more introvert or self-aware that is based on awareness, clarity, discipline, and, finally, view.

500 years later, this early teaching gave rise to a newer form of teaching, the Mahayana vehicle. This built on the previous ideas to then focus on the idea of great compassion. This is a code term for renunciation that sees the benefit or happiness of ALL beings as part of our spiritual project or focus. This is a path of magnanimous empathy. This informs the intention, orientation, and, in a subtle way, one’s realization.

500 years after this, the third type of development appeared. This appeared under various names but we will call it “Vajrayana” here. Sometimes it is called esoteric Buddhism or tantric Buddhism. To the Mahayanic great compassion orientation, Vajrayana added a whole series of spiritual methods, technologies or tools. Not to just experience awakening but to further enhance the existing realization of wisdom. The specific contribution of Vajrayana is to put devotion at the center of one’s spiritual practice. Devotion not in the sense of faith, which was already important, but in the specific sense of a readiness to give up on self reference (?) so that it creates a strong connection to the wisdom of one’s inherent nature as well as compassion.

In all of these three great traditions that gave rise to a variety of schools, there is a common thread running through them and a common basis for understanding the potential of spiritual practice and the dynamics on the path. That understanding is the view of the human being as a multi-faceted phenomena.

Another classification of the human being is in respect to action. This can be conventional action or spiritual discipline. This is the division into body, speech, and mind. This is not specific to Vajrayana but can be found in the earliest strata of Buddhist teachings. (Discussion of ten negative and positive actions here.)

Later on, the teachings taught that through actions of body, speech, and mind themselves we may use them to engender an awareness that is reflective of our true nature. This awareness is a close approximation of our true awakening. Practices were developed to use our body in very specific ways to quickly produce states of spiritual clarity, then use our speech to enhance this first realization, and then use our mind in addition to this to dissolve the remaining subtle sense of separation. By coming actions of body, speech, and mind, there is a skillful way to create a state that reflects our true nature. This experience serves as the basis for post-meditation practice, which is the rest of our life.

This is a post-traditional view of the spectrum of development of a very long and rich Buddhist history.

There is a very famous formulation of the Buddhist view that summarizes these developments in a specific way. This gives a context for different approaches or styles of Buddhist practice. The overarching principle is the View or Buddhadharma. This is given in four lines of traditional verse sometimes. These are the Four Seals or Marks.

Four Seals of the Buddhist View

We will see how these seals refer to body, speech, and mind and what practicing with these four seals means when developing a personal practice. We will also see how they apply to integrating practice with daily life.

We will conclude with refuge, which includes a dedication of merit. We open and close with this normally.

From Q&A after talk:

Question: What makes this “post-traditional?”

Question: What is meant by devotion?

Answer: In a traditional sense, devotion meant devotion to one’s teacher. Devotion was an integral aspect to reality. The way it is used in Vajrayana as an opening or as an quickening for both wisdom and compassion. Specifically, this means that instead of trying to develop wisdom through analytical means or generate a feeling of compassion, one opens oneself to wisdom and compassion as already existing, powerful features of the whole reality. Because it is sometimes difficult to access these features of reality, because these aspects often seem to be lacking in the world, these aspects of reality are often given symbolic forms that we can relate to. Sometimes the teacher is seen as embodying these as well. Devotion means something that is opposite to but synonymous with effort. In the same way that we can make great effort to pursue a certain discipline over a period of time, we can use devotion the same way without the idea of making a great effort but, instead, with the idea of opening ourselves to something.