Last September, I blogged about the tattoo work I was having done on my left arm by a friend. I had Buddhist refuge vows done in Sanskrit using the script commonly called “Siddham” here in the West. You see this a lot for mantras and other Sanskrit text in Japan and Korea (and I presume China, at least at some point). The vows go:

I’ve posted preliminary pictures before of what it looked like after the initial blackwork was done but not of the final design where it was outlined in red. We actually went over both the black and the red twice because I have a perfectionist tattoo artist and he wanted everything to look clean and strong (as did I).

This is what it initially looked like before the red work the day it was done before it healed: 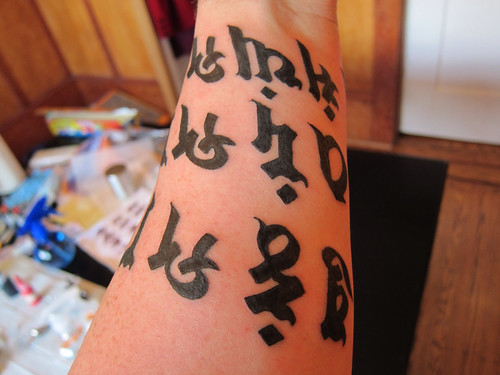 When I was outside to work out the other day, I noticed that the light was decent so I grabbed a couple of shots with my iPhone and I thought that I’d share them. (Ignore the fact that I’m still growing some of the shaved hair back on my freckled arm…) 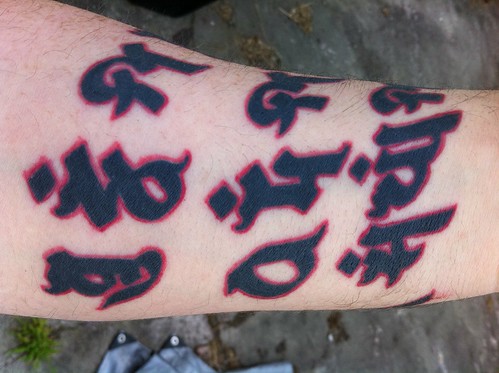 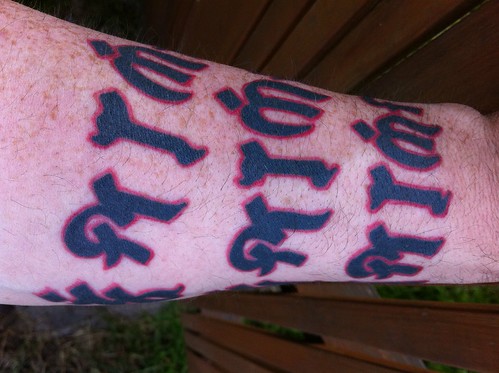 As you can see, most of the characters repeat because, if you look at the text I posted above, two of the three words are the same in all instances.

All in all, I think that is worked out very well and I get a lot of random comments from people I meet about the work. I take them as a reminder of my vows and my path as a Buddhist, engraved on my flesh.