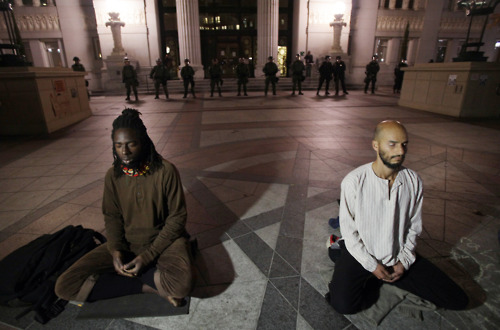 While I’ve spoken about it quite a bit on twitter (and retweeted a lot of posts by others), I haven’t said anything really about Occupy Wall Street (now just the “Occupy” movement) or my local branch, Occupy Oakland. I’ve felt that there is little that I could add and I haven’t had boots on the ground for it (I had LASIK done just about a month ago and wasn’t allowed to touch my eyes, let alone get them tear gassed). I didn’t feel that I could say things better than the people putting their presence (and butts) on the line.

Seeing the pictures of this morning’s raid with meditators calmly sitting as the police in their riot gear took them away brought it all to mind again. As much as Buddhists can take a more active role in the world, I think that our real strength is simply be present, aware, and paying attention as things go on. Lending an unmovable presence and awareness to things without getting into the mix, yelling, speechifying, or otherwise involved. I certainly don’t have any criticism for those that do these things as long as they are non-violent but I see our role as being that point of stillness.

The people at Occupy Oakland are in a rough spot. Oakland has had a lot of troubles over the last few decades and the role of the police in these troubles has rarely been positive. I don’t know what the current figures are but it used to be that the true unemployment for 18 to 35 year old Black citizens here was at least double the rest of the population and, often, triple, and are disproportionately underrepresented in education and the good jobs (hello, silicon valley) around here. We have cops here that have been caught over and over again creating their own laws. We had a rogue cop group in the 1990s and the police are currently operating under an agreement and citizen oversight from the last time they were kicking the crap out of protesters a number of years back.

Needless to say, it isn’t surprising that things have escalated here in Oakland as the cops have turned up the heat. In the long run, responding to violence with violence isn’t a solution. It just gives the cops an excuse to beat heads and look justified to the public in doing so. While I don’t really expect that non-violence will be maintained, just because of the way people are and how people around here feel, I do wish it could be. 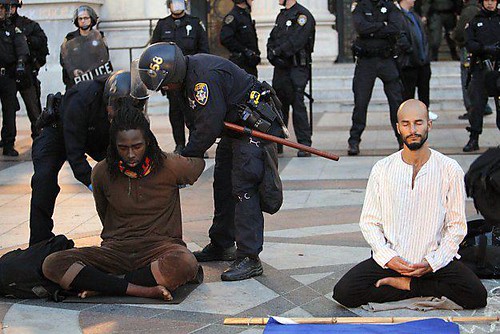 The Occupy movement is getting people talking about the injustices in wealth in our society. It is pointing at the systematic pillaging by certain elements of society, be it bankers looking for short-term profit or the fabulously wealthy who are happy to take the short-term gains in wealth for the long turn detriment of their own culture. The only way that the Occupy movement can really win is by being present and just not going away. This isn’t about actively smashing the state (sorry, black bloc!) but about getting our fellow citizens, including those who think things have been rough but are going to get better, to really open their eyes and look at how our society is operating and where it is headed. Some people have decided that enough is enough and are making a public statement about it. That can be enough if it raises awareness in others to the point where it begins to affect their day to day decision making and how they live their lives. The destructive aspects of our current way of life and of how wealth and opportunity are apportioned can only continue if the great mass of people allow it. If they choose to no longer allow this, be it by not participating or even taking non-violent direct action, things can change. It might take quite a while but, as the cliche goes, this is a marathon and not a sprint.

As Buddhists, we need to bear witness and do what we can to relieve the suffering of others. As one of my teachers has often said, it begins with, “How can I help you?” directed towards other beings around us. We cannot simply do this for ourselves. We know that the suffering that we see in the world around us has a solution. It isn’t a short-term one or an easy fix but it is attainable for all of us.