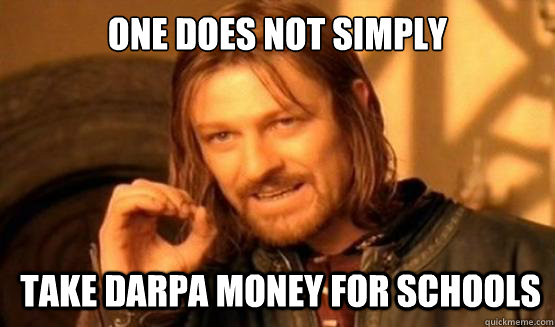 A little levity for your memes

There is a bit of a controversy brewing right now that, in many ways, may be a tempest in a teapot, but also points to larger divisions in the hacking/making community.

O’Reilly Media’s Make division, in partnership with Otherlab, has received an award from The Defense Advanced Research Projects Agency (DARPA) in support of its Manufacturing Experimentation and Outreach (MENTOR) program. The team will help advance DARPA’s MENTOR program, an initiative aimed at introducing new design tools and collaborative practices of making to high school students.

Makerspace […] will integrate online tools for design and collaboration with low-cost options for physical workspaces where students may access educational support to gain practical hands-on experience with new technologies and innovative processes to design and build projects.

The MENTOR effort is part of the DARPA’s Adaptive Vehicle Make program portfolio and is aimed at engaging high school students in a series of collaborative distributed manufacturing and design experiments. The overarching objective of MENTOR is to develop and motivate a next generation cadre of system designers and manufacturing innovators by exposing them to the principles of foundry-style digital manufacturing through modern prize-based design challenges.

The MENTOR contract award provides the initial year of funding for what is expected to be a four-year program. Throughout the program, O’Reilly Media and Otherlab will work to develop both a physical and digital workspace for collaborative design and manufacturing in high schools. Students will have access to sophisticated new tools for digital pattern making that allow them to create complex 3D objects using a variety of manufacturing methods, including low-cost manual or machine techniques. By making the dependency on specialized equipment optional, a broader range of schools may participate in the program, adding these tools later if needed. These tools also embody advanced methods for completing distributed design and manufacturing.

Make magazine also published a blog post on this as well.

As it turns out, the public details of MENTOR are available on fbo.gov. There, it is noted that MENTOR is part of a larger program, “Adaptive Vehicle Make,” which has the following objectives:

You’ll see the third goal cited a lot in discussions of MENTOR but not much mention of the first.

This led to a number of blog posts, somewhat criticical of Make’s involvement with DARPA:

The first of the above includes some rather choice tweets from Tim O’Reilly of O’Reilly Media and more interesting ones, involving the editors of the Boing Boing blog can be seen here and here as well, which may explain why Boing Boing hasn’t covered this issue.

On April 2, Mitch Altman, one of the founders of the Noisebridge hackerspace and someone who often acted as a bit of an ambassador from the hackerspace movement, told everyone, via twitter, facebook, and some hackerspace email lists, that he would no longer be associated with Make Faire. He said:

It’s official. I’m greatly saddened I won’t be helping at US Maker Faires after they applied for and accepted a DARPA grant.

This caused a bit of a flurry of conversation over the last few days, such as the typical Slashdot trollfest, finally leading to an official statement from Dale Dougherty, the publisher of Make magazine and the man in charge of Maker Faire.

With all of this, you may very well be asking, “So what? Why do I care?” I can’t really tell you why you would care but I can tell you why I care. As I call out above, DARPA’s MENTOR program is part of the Adaptive Vehicle Make (AVM) program. That program’s first objective is “to dramatically compress development times for complex defense systems such as military air and ground vehicles.” What this means is that the AVM program is, first and foremost, a military program. It is about the development of military vehicles. Now, MENTOR’s specific goal “is to develop and motivate a next generation cadre of system designers and manufacturing innovators…” What this effectively means is that MENTOR is an educational program to develop designers and innovators (including, one surmises, engineers). This is all well and good. We can use more engineers in America. The problem is that this is meant to further the AVM program for the development of military vehicles. DARPA is interested in putting money into educational programs in order to guarantee itself a supply of the right kind of people to make military equipment or to develop new equipment.

This leaves me in a moral quandry. On the one hand, we have money that is being targeted to education, specifically science and engineering education. This is where Make is coming in with its role in the program to do this work in high schools. As they say in their press release:

“Makerspace […] will integrate online tools for design and collaboration with low-cost options for physical workspaces where students may access educational support to gain practical hands-on experience with new technologies and innovative processes to design and build projects.”

On the other hand, we have school programs being funded through the Department of Defense, of which DARPA is a member, rather than the Department of Education. As a parent of a 16 year old girl, I understand the need for science and engineering education. I helped start a hackerspace in part because I saw this very need, not just for myself, but for others in my community. I believe in “practical hands-on experience with new technologies and innovative processes to design and build projects.” That’s what we’re all about at Ace Monster Toys. The problem is that I really don’t want the military involved, no matter how indirectly, in the education of my child or that of other children. Money is a form of influence, even if done indirectly, and I feel a lot of aprehension at the idea of the Department of Defense having an ongoing channel of influence into the science and engineering programs at schools. We have a society with a strong and traditional separation between civilian life (including education) and the military and some very good reasons for this separation (look to history in certain regions).

Outside of this specific MENTOR program, there is also ongoing efforts by DARPA and willing hackerspaces to fund various effforts. Just this week, I received the news that the Hackerspaces Global Space Program had received DARPA funding (more docs are here and here with their mailing list archive here).

All of this together feels to me as if it serves as an opportunity to legitimize military involvement in our education institutions and also as a means for the possible co-opting of the hackerspace movement by the military. Hackerspaces have formed as a ground up phenomena, first starting in Europe and then spreading to America during the last few years (Mitch Altman played a key role in this effort, I should point out). No governmental entity or program created these workshops and educational spaces. We did it ourselves as a DIY movement. I fear the influence of government money (which is often called “free money” by folks) on our independence. There is also the issue that many of us, as individuals, have been supportive of anti-establishment movements like Occupy and one wonders how government backing would affect the kinds of activities and speech groups or people are willing to support.

At the end of the day, though, I’d like to see educational departments fund education, not military departments. While I understand the argument that it is our tax dollars and we should take education funding where we can get it, I do not believe that there is any such thing as “free money.” Money, or funding, always has implicit or explicit strings attached. There is a reason that people are giving it out, after all, and attached agendas. This doesn’t make DARPA or even Make bad actors in any sense but it does mean that we should think long and hard about these issues, especially when it comes to the funding of the education of children or the potentially changing effects on the organizations and movement that we have worked so hard to build.

I would use this as a call for more transparency and dialogue on DARPA and its grants to various organizations and individuals. Let’s get everyone talking, not simply flaming one another and drawing lines in the sand. I’ve had several brief e-mail exchanges with Dale Dougherty about this and I’ve found him to be a perfectly rational and well intentioned individual. I think there is room for all of us to have differences of opinion but I also think that there should be an open discussion, if not debate, on all of the issues around this and the reasons why this is acting as a lightning rod for many of us.