In the Footsteps of Wonhyo 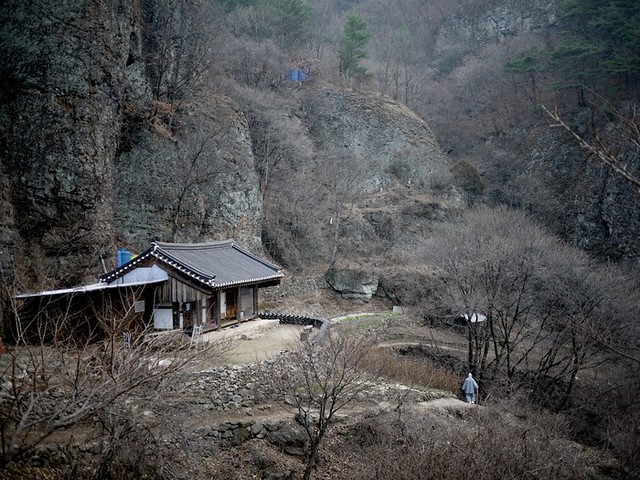 The other day, I heard about a new kickstarter, In the Footsteps of Wonhyo, when my own teacher backed it. As the kickstarter page explains:

This documentary explores the ancient Korean monastic way of life in the mountains through the eyes of a Western pilgrim travelling across South Korea. Besides introducing the audience to the beauty of Korean nature, and the wisdom and simplicity of Korean Zen Buddhism, the film will encourage the creation of an official Buddhist pilgrimage trail covering 500 km. When this documentary is made, and when the route is established in the future, it will help thousands to increase their wisdom and compassion, control their karma (habitual patterns) as well as provide economic growth to rural Korea along the path.

The narrator, a retired Canadian writer and Buddhist, follows in the footsteps of a beloved 7th Century Korean Buddhist saint Wonhyo who, according to popular tradition, found enlightenment in a cave near the western seaboard after walking across the Korean peninsula. The narrator discusses with meditation masters in the mountain monasteries Wonhyo’s teachings on oneness and reconciliation and asks questions such as: “How do you overcome suffering and achieve happiness?”, “Can one attain enlightenment in the cities, or does one have to go to the mountains?” and “What spiritual advice would you give to people watching this documentary?”.

In and of itself, this looks to be an interesting project. As a general rule, I try to back Buddhist focused kickstart projects that actually look interesting or likely to educate or otherwise do some good. As a practitioner drawing heavily from the Korean Buddhist traditions, this project is actually pretty near and dear to my heart.

The project is more interesting than just the film, though, since this is the second time that the makers have done this pilgrimage. If you go over to their site at inthefootstepsofwonhyo.com, you can see that the film is an outgrowth of a previous pilgrimage, done last Fall as part of the “Wonhyo Pilgrimage Project.” Four of these fellows (the same people involved in the current filming work, I believe) hiked accross Korea, staying at temples and local places along the way. If you dig through their site, scrolling back through the older pages, you can see the entries for the two weeks of their trip, which ended at Wonhyo’s cave. It makes for some interesting reading and I think it adds quite a bit of context to the current filming. (They also have a flickr stream of images from last Fall as well.)

As an aside, in the course of going through this, I found this new (to me) story of Wonhyo and an encounter with the Bodhisattva of Compassion, usually known in the West as “Kwan Yin” from the Chinese. David Mason explains how Wonhyo messed up in being compassionate and taking what was given to him when encountering a stranger on his way to the temple. These kinds of stories remind me of the old European tales of travellers encountering gods and failing (or succeeding) in offering hospitality to them with all of the attendent repercussions.

I think that this is a worthy project to back if you are a Buddhist or even just interested in this sort of thing. This is an example of the kind of thing that I think crowdsourcing excels at: a small project doing something interesting and not even looking for a lot of funding. Please consider backing In the Footsteps of Wonhyo.