Words on my Grandfather 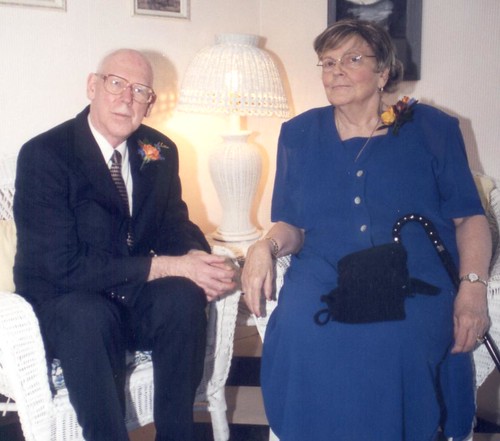 This morning, my maternal grandfather, Ethan Beals, died. To my recollection, he was 85 years old, growing up during the Great Depression. He had been suffering from Parkinson’s these last few years and have collapsed suddenly about a year ago. Since that time, he’s been in a care facility and started to dramatically deteriorate mentally and physically in the last six months. His passing is not unexpected but is definitely a bit of a shock.

I have had an unusual relationship with my grandparents. I was their only grandchild until my brother was born when I was nine and he and I were the only grandchildren until my other cousins were born another eight or so years later. For the entirety of my early childhood, I was the only child in the family and one of two until I was practically an adult. My youngest uncle is only nine years older than me, the same distance is between us as is between me and my brother.

In the 1980’s and into the 1990’s, I lived with my grandparents in Seattle. I had moved away to Utah at age nine and come back to Seattle at fourteen, briefly. I somehow managed to convince them to let me stay, instead of returning to Utah with my mother and brother, as I was in high school already. Later, I again somehow convinced them to allow me to skip my senior year of high school and go to college. They loved and supported me during the entirety of this, wanting me to get an education and be happy, and giving me a home. I didn’t always get along with them and was a rather difficult teen and young man at times, but they still gave me a home.

Ethan was there when I didn’t really have a father in my life until I was an adult. Grandpa was overwhelmingly the positive male influence in my life, a strong and stoic fellow, though not terribly communicative or without his issues. He was definitely stubborn but had a wonderful sense of humor if you could see it (I still remember him sitting there and laughing at a string of “funny” numbers). He was an electrical engineer at Boeing for more than 30 years. Under his influence, I built my first computer and became unafraid to poke at things or try to understand technology. He believed in education and hard work.

Ethan was a deeply religious man and a longstanding member of the Nazarene Church, a form of Methodism. He and I did not share the same faith and while I know this concerned him, my grandmother, and probably much of our family, he and I never had any intense or disagreeable arguments or fights centered on faith or, really, at all. I always assumed, because we never spoke about it, that he was disappointed in my choices but that he and my grandmother still loved me (which she tells me whenever we speak). As someone who has walked an odd spiritual path to my Buddhism, I appreciated the love even with the disagreement on faith and never felt judged by them.

Ethan was married to my grandmother, Mae-Sallee, for more than 50 years. They raised two sons by birth, another son by adoption, my mother, and, to a great extent, me, in the course of this time. As an example of a man living an upright and moral life, I don’t think I could ask for one finer.

I miss you, grandpa. Godspeed.