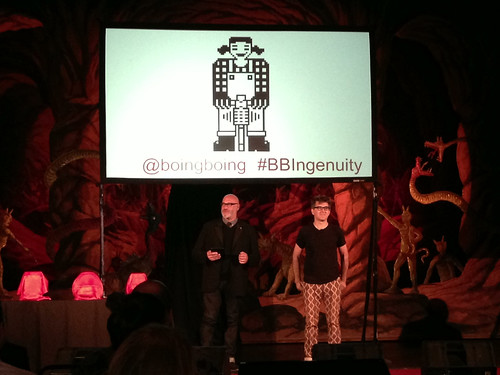 I managed to go to Boing Boing: Ingenuity this weekend. This was a one day hackathon followed by “vaudeville for geeks” set of presentations and performances yesterday. I actually missed the hackathon on the first day because I wound up having my birthday BBQ for my 42nd birthday (which is today) on Saturday and I’m kind of a crappy coder anyway. This was an invitation event but a free one (sponsored by Ford but it was a low-key sponsorship). I wasn’t sure what to expect before I arrived.

Yesterday’s event was very cool but also very odd, in a way. I kept trying to figure out the demographics of the group there (as one does…) because it was this mix of hackerspace people that I knew, makers, inventors, artists of various sorts, and happy mutants of the cacophony society sort. I ran into fellow hackerspace founders, including the BioCurious folks, embedded systems programers (who were also musicians), authors, designers, and artists.

The events included presentations by designers, musical performances, talks about SETI, a mentalist, the founding of BioCurious and a variety of other things.

I would say that I most enjoyed two particular presentations.

One was near the beginning and that was Chris Noessel presenting on user interfaces in science fiction (specifically movies) drawing from his work for Make It So, the book he co-wrote on the topic and documented on his website for it. Chris is a friend of a friend and I last saw him debating over beer after the most recent Batman movie about how certain things made no sense (!!) in the movie. I’ve heard him mention his work on science fiction but hadn’t actually seen any of it so it was cool (and pretty amusing) to see him present.

The last session of the day is the other that I really enjoyed. This was by Mythbusters’ Adam Savage (and now tested.com on being a maker. A couple of the anecdoates in it I’d heard before, probably when he spoke at Defcon, but I enjoyed his voice over of his ten rules for success. I find these rather inspirational even if I’ve never managed to follow all of them! 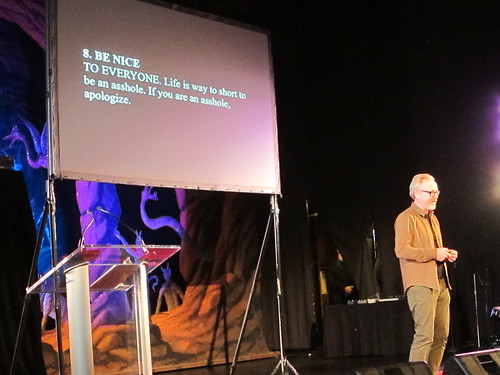 As someone who spends a lot of his life at a hackerspace, thinking about hackerspaces, and actually trying to make things (and my professional life in kind of a related context), this was both useful and a lot of fun. I think younger makers, especially, could really learn a lot by following these rules.

I’m not sure if Boing Boing: Ingenuity was a one-off event or the eventual building to more events but I’m very glad that I was invited to attend and got to experience it. I think that there are only a few places in the world where you could get this particular mix of mutants together and it was cool to be a part of it.